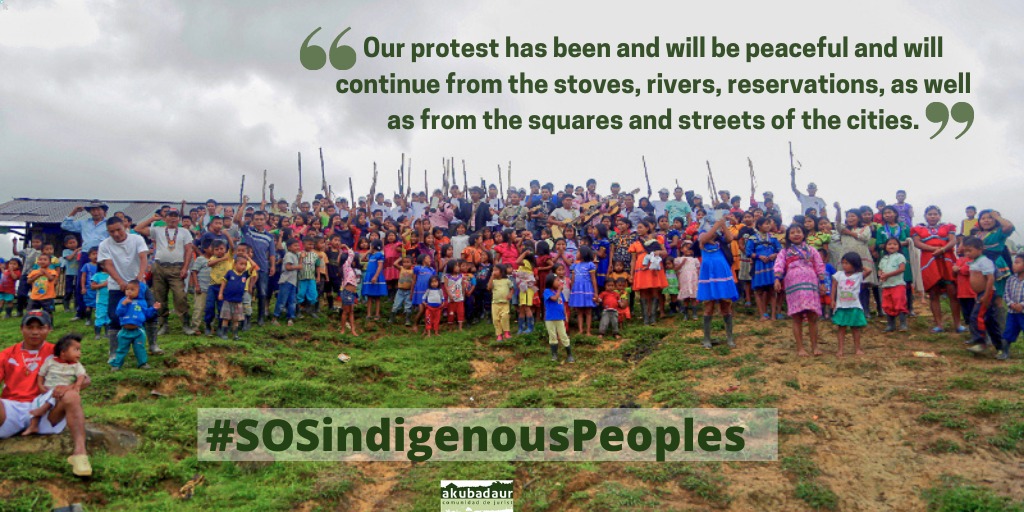 To us, as indigenous peoples, the word “MINGA” means dialogue, harmony, balance, complementarity, responsibility, solidarity and reciprocity. Minga is a community gathering to work as a family, where the life and culture of indigenous peoples are recreated. Implies good living, and the search for common good.

Given the number of deaths (47) and alleged disappearances (435) during the 13 days of protest, The Akubadaura Community of Lawyers demands guarantees for the lives of the protesters and their legitimate right to social protest in the continuity of the National Protest and its Call for the mobilization of this May 12, 2021.

From Akubadaura we see with concern the response to the social mobilization by President Duque who, instead of guaranteeing the lives of protesters, called on the indigenous peoples to return to their reservations. Indigenous peoples, as citizens, are entitled to the fundamental right to protest and we can ally ourselves with the voices that fight for a more pluralistic country that seeks to fulfill the promises included in the 1991 Constitution. Our protest has been and will be peaceful and will continue from the stoves, rivers, reservations, as well as from the squares and streets of the cities.

“We are extremely concerned about the bad decisions of the sitting government to confront social protest, its recklessness, indolence and its violent actions are in disproportionate conditions through the military and Police forces against civil society. What is being lived in the streets today is a clear example of the discontent of the people tired of mismanagement, bad political and economic decisions, as well as the setbacks on the Peace agreement, the assassinations of social leaders, the extreme poverty, the marked inequality gaps and the structural racism that is promoted in this case, by the governments in power in our country. We do not see any political will to guarantee access to vital rights or the care of life when we are silenced with such repression and violence”, said Lina Marcela Tobón Yagarí, an Emberá Chamí woman, director of Akubadaura.

This sentiment responds to the events of the last few days in which Daniela Soto, an indigenous woman, was seriously injured and another 11 mingueros were hospitalized after the shots they received on Sunday, May 9, at the facilities and around the Universidad del Valle where some indigenous organizations were staying to support sectors of the Indefinite National Protest in the country.

“Duque must ask for public forgiveness” demands Indigenous Governor Tata Pedro Velasco, member of the Indigenous Authorities of the Southwest of Colombia, AISO and adds that “What (Duque) seeks to discuss had already been included in the Peace Agreement and that is why we demand its implementation. If the repression and the government of death continues, we will not advance in any point of convergence”.

Added to the worrying situation is the version offered by the mainstream media that, as Noticias Caracol, in its broadcast on May 11th at noon, makes an apology of the benefits of Valle del Cauca and its business community without making a single mention of the indicators of social inequality and poverty that are part of that same reality, also ignoring historical versions that relate the origins of the fortunes of the Valle del Cauca business community to the slavery of the Afro and indigenous peoples.

The media also do not contextualize the expropriation of land from ancestral peoples during the 19th and 20th centuries, to build their sugar empire from where they derive their status as entrepreneurs and hence their deep racist attitude.

President Duque, instead of using the power of the Government to protect the lives of the protesters and seek the consensus that leads to solving the inequality and discontent that exists in the country, as well as to stop violence, repression against protesters and punish abuses, uses its power to stigmatize the peaceful mobilization of indigenous peoples, especially the Regional Indigenous Council of Cauca – CRIC-.

For Harold Secué, counselor of the ACIN: “The Police has a lot to do with these civil confrontations … on the one hand people in civilian armored vehicles shoot at us, but the Police, an accomplice, also shoot.” He also said that in the Demonstrations, using terms like “the Indians are dirty” Cali dwellers expressed their racism.

“It is a strategy of the military, which Zapateiro has used and which the Democratic Center has always used, to point out us as the cause of the chaos. We are in Minga to protest, and they are killing the protesters. It is real that the mingueros entered neighborhoods and condominium parks, but it was because the trucks that fired at us went in there”, Secué emphasized.

We ask that the “negotiation” dialogue between the national government and the various sectors that are protesting be kept open, so that proposals are heard and solutions to problems are found.

We demand that state institutions carry out the pertinent investigations on the people who are perpetuating acts of violence against indigenous peoples and the Minga.

We ask international organizations for urgent intervention in the face of this situation that is putting the lives of people who are protesting in the streets at risk on a daily basis.

We ask fellow Colombians to surround and protect the indigenous peoples because the attack we are experiencing is a genocide that is taking place before the eyes of the Colombian government.