With the idea and motivation of advocating the rights of indigenous communities and peoples in Colombia and throughout the region, with the transcendence, decision and strength of mother earth, two indigenous women: Ana Manuela Ochoa, from the Kankuamo people, and Patricia Tobón, from the Embera people, supported by the National Indigenous Organization of Colombia, Onic, started the Akubadaura Community of Jurists in 2012 as a way of responding to the countless legal issues faced by indigenous communities and peoples in Colombia. Our organization provides legal aid to indigenous communities in different issues such as land restitution, application and titling of reservation and safeguard rights, criminal justice in cases of selective assassination of indigenous community members; advocate for indigenous women rights and indigenous prison population; so that, from this technical work, we have a political impact and thus materialize in rights.

Akubadaura in the Embera Chami language means “Helpers”. Akuburu is the name given to the function of a person’s role in traditional medicine and in the generalization of the term means “helpers”. Help within processes, in accompaniment, in building bridges, says director Lina Tobón. 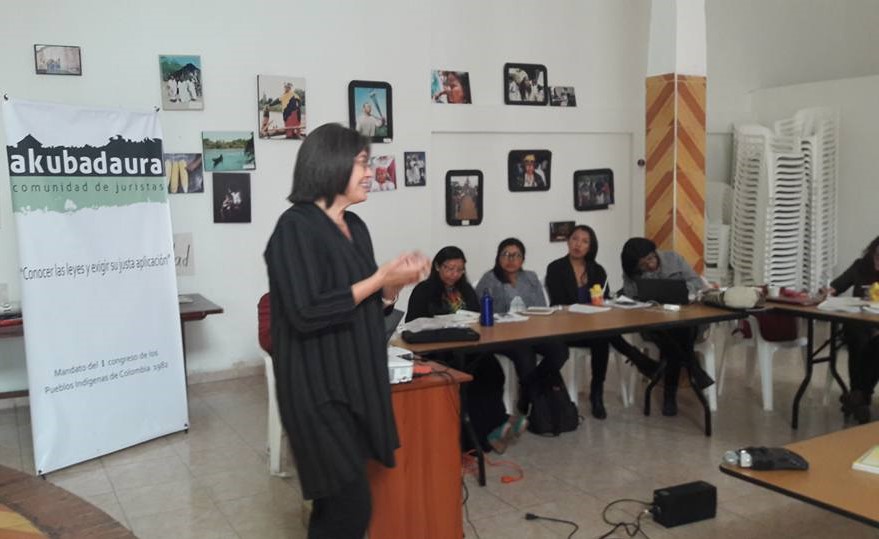 All of us who are part of the Akubadaura Law Collective are indigenous lawyers, and professionals from different branches of knowledge, who in the history and context of our country have a responsibility regarding the recognition and advocacy for The rights of indigenous peoples and communities; we are the first generation of indigenous professionals from each of our communities; All of the acting members of Akubadaura, at some point in our own life stories have had to assume leadership responsibilities within our peoples and ethnic territorial organizations.

In advocating for the rights of indigenous peoples and communities we have accumulated valuable experiences, methodologies and analysis  that allowed us to shape our Organization and defining strategic lines, identifying the gaps and needs for strategic actions that were not be effectively developed or promoted from the processes of enforceability in the organizational processes of our communities.

Although the Corporation was legally constituted in 2012, it is until 2015 when it´s able to sign Its first project with the support of the Lutheran Federation. This project enabled our organization for the legal aid in the case of Land Restitution Process of the Embera people in Alto Andágueda in Chocó, as well as the three-year accompaniment of this community in the form of legal advice, political training women empowerment.

Our organization was the Temporary Secretary of the Legal Observatory of the Andean Coordinator of Indigenous Organizations CAOI, in which we documented and reported cases of infringement of territorial rights to free, informed and prior consultation; the right to differentiated development of indigenous peoples in Colombia, Ecuador, Peru and Bolivia to international instances of the Inter-American Human Rights System and the United Nations System.

Our counsel team has served as legal aid to United Nations Agencies such as : the UN Women and the United Nations Population Fund; the Office of the High Commissioner for peace of Colombia on issues related to indigenous peoples rights and peace building; advocacy for indigenous women rights before Indigenous Authorities and Government Agencies to take action against harmful practices that affect the health of indigenous women and girls, like female genital mutilation.

Most recently, attending the requests and needs of peoples and communities, we have expanded our actions to six lines. In these last five years we highlight our support:

• The accompaniment in the implementation of the ethnic and gender approach chapter included in The Final Agreement for Peace;

• Our work in the recognition of indigenous peoples as protectors of biodiversity for the benefit of the planet;

• The strengthening and participation of indigenous women, in the demand for the territorial rights of ancestral peoples;

• The promotion of prior consultation as a right to guarantee survival;

• Follow-up on compliance with the decisions of the Colombian High Courts on the land restitution policy.

• We focus on transparency for the allocation of resources to indigenous communities and peoples.