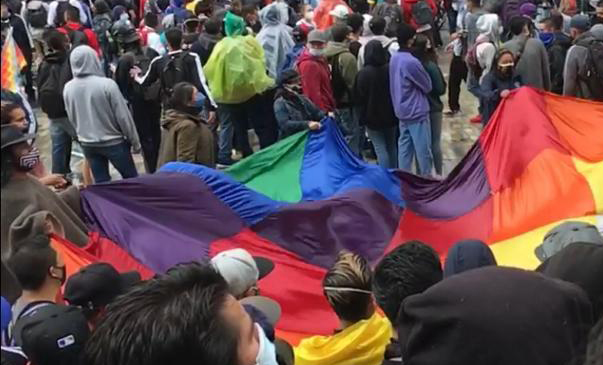 Bakatá, May 7th, 2021. Indigenous peoples, Afro communities, peasants, students and workers, citizens from all backgrounds and regions of the country demand, through social mobilization, that fundamental rights are guaranteed, the stop massacres and assassinations of social leaders and indigenous leaders, and the compliance of the peace agreement.

Since April 21st, after the assassination of Sandra Liliana Peña, indigenous governor of the La Laguna Siberia Indigenous Reservation in Caldono (Cauca), the Regional Indigenous Council of Cauca -CRIC- has been conducting the ‘Minga’ to demand respect for their Rights. During the May 4th mobilization, unknown armed men took the life of the indigenous leader Alberto Iguanito of the Sikuani people of the Iguanitos Reservation in Arauquita (Arauca).

Therefore, and as stated by the National Indigenous Organization of Colombia -ONIC-, “our brothers and sisters” of the U’wa Nation, Sikuani, Embera Eyábida or Katios, Emberas and Waunan, Awá and Nasa, located in the Amazon, Chocó, Nariño, Valle del Cauca, Cauca, Córdoba and in other parts of the country, “are up in the fight” for their rights.

The outrage over the murders, massacres, displacements, police brutality, in addition to the Government’s negligence towards the country, reflected in the tax reform and health care reform proposals presented to Congress, has led Colombians to rise up exercising the legitimate right to protest.

In addition to these facts, since the signing of the Peace Agreement in 2016 to June 2020, 270 indigenous leaders have been assassinated, 60% (167) of those killings have occurred during the Duque administration. Worrying data if one takes into account that, by 2020, we are talking about 39 Indigenous Peoples groups in imminent risk of physical and cultural extinction and 35 Indigenous Peoples groups with less than 200 inhabitants.

As if that were not enough, human rights and gender organizations reported more than two thousand five hundred (2,527) cases of sexual violence against the indigenous population between 2015 and 2019, many of which are not reported by women because there is no ethnic differential attention, constant threats and fear, which has even led to suicides.

42% of the Colombian population earns less than 100 USD (366 thousand COP) a month, the minimum subsistence wage according to the Government’s Statistics Agency Dane (as reported by La Silla Vacía). Among the poorest are the majority of indigenous peoples, Afro and a high percentage of the mestizo population and therefore the communities are in the streets in a ‘Minga’ that seeks to implement historical agreements in each social dialogue, at each table of Agreement, in the Peace Agreement and in a number of consensus spaces that sought improvements in education, equity of resources, land titling and other aspects that guarantee the dignity of the people, communities and peoples that inhabit the territory.

The problems that indigenous peoples, Afro, and mestizos agree on are inequality and exclusion in which we have historically had to live. We are concerned about the setbacks of the national government in terms of human rights and the rights of ethnic communities, such as the right to prior, free and informed consultation, the right to health in relation to the measures taken to address the impact of the pandemic to safeguard our communities, and the right to peace for the non-compliance with the agreements.

That is why from the Akubadaura Community of Lawyers we demand the prevalence of democracy, as well as the fulfillment of the constitutional rights of the Colombian People in its diversity, the respect and comprehensive guarantee of human rights. We demand the cessation of violence, guarantees for the exercise of social protest and we ask that a broad national and inter-ethnic dialogue be generated.

We invite Colombians to jointly build proposals for national dialogue, to reject violence and to express solidarity with the victims.

We call on the international community to continue accompanying the communities throughout the national territory, to be guarantors and verifiers of respect for human rights and international humanitarian law.