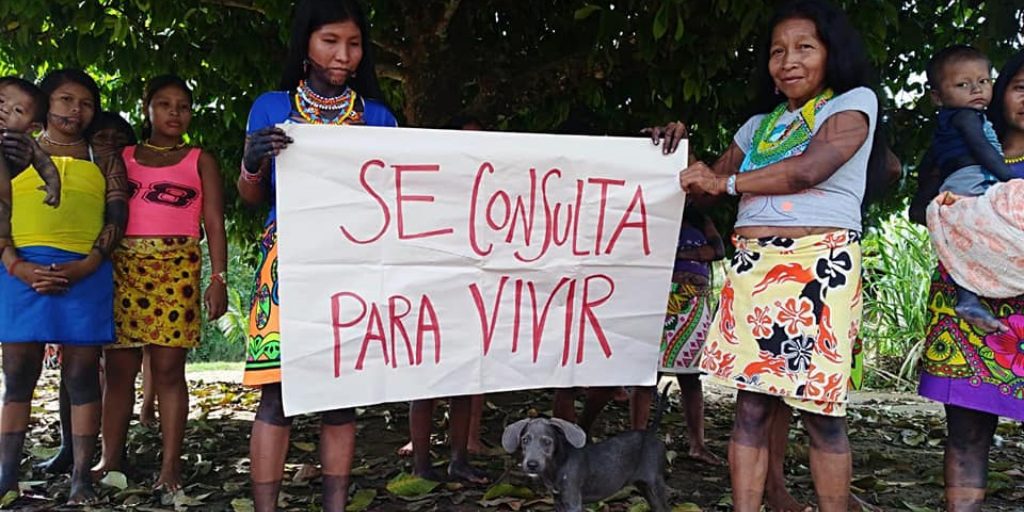 In its latest report, Akubadaura analyzes the historical evolution, legal development, and implementation of the right to Free, Prior and Informed Consent in Colombia (FPIC).

In the report, Akubadaura argues that the legal understanding of  FPIC contains deep conflicts between the norms and the legal decisions. For example, the latter does not respect other fundamental rights, and does not  reflect the distancing between political and hermeneutical views. However, it is also true that in Colombia there is progress in the jurisprudential recognition of FPIC as  collective  right, a tool for inter-ethnic dialogue and peacebuilding, and as an instrument for the protection of ecosystems and planetary life.

In this conversation,  Lina Marcela Tobón Yagarí, Executive Director of Akubadaura, and Fernando Herrera, researcher at Akubadaura discuss the scope of the report, the obstacles for  FPIC’s implementation, and future steps.

1. What do you think are the main causes of FPIC problems?

In Colombia there is no single barrier to FPIC’s implementation. On the contrary, ethnic peoples face multiple obstacles. In our research we found that there are conflicts in terms of scope between the rules issued by the Executive and the jurisprudence of the Constitutional Court.

Contrary to its advances in Courts, regulation issued by the national government reduces the level of protection of consultation processes. Even when governments have issued them, indigenous nations and Afro-descendant peoples have been excluded from their formulation.

Ethnic peoples also face problems in exercising their right to FPIC related to the State’s institutional design. For example, in cases where administrative projects overlap or lie alongside ancestral territories, access to information is fragmented and out of date. In fact, we find that there is an abuse by government agencies on the figure of information reserves, which affects transparency, social research, and community oversight. The situation is no better when institutional coordination is evaluated. For example, in our research we found that the prior consent  processes are led by the Ministry of the Interior, which defines the times and methodologies, without the indigenous and afro-descendants participation.

In the cases that we studied and presented in our report–which are those communities with which we constantly work–, we show each consultation process suffers of many difficulties.  For example, there are difficulties in the evaluation of risks and socio-environmental damagesplans.d. At the same time, we see that the instruments used on the evaluate legal compliance are not created in consultation with the nations. In Colombia there are no mechanisms for inter-institutional coordination and expansion of  social dialogue.

2. Based on your research and analysis, what do you think are some of the most important ways we need to change the work with the right to FPIC?

Currently, in Colombia, there are many changes that must be made to guarantee the right to FPIC.

First, we need  a human rights education model that must be developed to recognize the rights of indigenous peoples, Afro-descendants and the rights of nature. Colombia is a country in which hundreds of ethnic peoples live, and until now, the only narrative that has been presented is the one related with  the mestizo population. The obligation to understand the rights of ethnic peoples also falls on both national and local public officials. At the same time, solid training in ethnic and environmental rights must be included in different groups such as unions, military and scientific leaderships.

Second, it is urgent to strengthen the mechanisms and indicators to verify compliance with court rulings s. Part of this effort is what we do on our website about  prior consent in Colombia–which is part of this same research project from which this report is part. The executive and judicial branches, and the control agencies must be included in following-up the implementation of this right

In the institutional processes, the Government must also articulate territorial and national agencies. In the feasibility studies of projects, works and administrative measures, the protection of the FPIC and other territorial rights of ethnic peoples should be prioritized. For each consultation, the institutions must deepen, systematize, update and democratize, in real time, the information on the PWMs that may affect ethnic peoples and their territories.

Third, and this is an element that comes out constantly and that was recently discussed with the proposal of the Cambio Radical Party to regulate the FPIC without consultation, is that FPIC’s regulation can not be done without the full participation of ethnic peoples. And the norms on FPIC must comply with national Courts rulings and international law.

Finally, these regulations must take into consideration the situation of each ethnic group, including the principle of cultural adequacy. For example, the consultation processes with the nations in the Amazon region cannot be the same as the processes that are developed with the Andeas. Each consultation process must respect their calendars, laws and territorial regulations, as well as their realities, needs, world views and their ancestral law.

Our report is the result of four years of research and direct work with ethnic peoples in Colombia. First, we hope that the report will be useful to them . Our  dream is that no more consultation reports have to be written documenting violations of this right. We hope that indigenous and Afro-descendant organizations can use this report as input in the internal discussions and conversations with institutions and agencies.

We make some fundamental recommendations to the judicial authorities. We ask the judges for greater dialogue with ethnic peoples and to implement strict monitoring of their decisions. To governments, whether national or local, we show them their failures so that they can make the necessary institutional changes to protect FPIC, and we ask to the Government control bodies a  critical and stable participation in the consultation process Finally, we hope that this report will be the opportunity to resume the conversation with international actors such as the agencies of the OAS and UN systems.

4. What are your next steps for this report?

At Akubadaura we will continue working with ethnic peoples who are fighting for the protection of their rights and territories. On this issue we consider of great value the presentation of our webpage on FPIC, for advocacy, research, and monitoring activities. The users of this webpage  will find, for example, increasingly comprehensive information on FPIC processes, the actions of ethnic organizations, and the intervention of Governments

We will also carry some events to discuss this report with various actors such as ethnic peoples, public agencies, academia, human rights networks and international organizations. We believe that this report is a fundamental contribution of Akubadaura for the protection of the right to FPIC of the ethnic peoples of Colombia and in Latin America.